Thank you! Your submission has been received!
Oops! Something went wrong while submitting the form
Contact us
info@nomadic.kz
English Русский
Home page > Tours common > Tours > Sightseeing > Bayanaul – legends and stories

The Bayanaul Mountains located in the south-west of Pavlodar region, in the north-eastern part of the Kazakh Upland — Saryarqa. The forested mountain range is literally saturated with history and legends. Every rock, every lake, every stone: everything here is connected with a historical or legendary event. The name of the mountain forest area refers us to Bayan-Sulu — the heroine of the folk epic poem «Kozy-Korpesh and Bayan-Sulu», which tells about the tragic fate of two lovers. On the territory of the Bayanaul Mountains there is the national park of the same name.

Day 1
Meeting with a guide and driver. Drive to Zhasybai lake from Karaganda (260 km, 4 hours). Arrival, accommodation. Lunch. Walking around lake, visiting  beach and viewing points. Swimming and boat-riding optionally. Short walking excursion from lake to Zhasybai pass (4 km there and back), return to hotel. Dinner.

Day 2
Breakfast. Moving from village Zhasybai to natural monument Kempirtas (10 km). The Kempirtas rock formation (Baba-Yaga) is one of the most recognizable symbols of Bayanaul, which can be found in most of the photographs taken in these parts by tourists. Transfer to lake Toraigyr (10 km). A walk along the lake shore in the foothills of the picturesque Serketas rock (Sakenshiny), a visit to Auliebulak, a spring with healing water (it is said that spring water helps with skin and respiratory diseases), as well as the grove of relic black alder, the pride of the national park. Return to the village Zhasybai (17 km). Dinner. Moving the village Zhasybay — the neighborhood of the Konyr-Aulie cave (15 km) with a stop on the way to the nature monument Saimantas (a rock formation of a very peculiar form). From the Konyr-Aulie cordon, walk up to the cave (about 1 km along the path and wooden stairs). A visit to the cave in which, according to legend lived  saint Konyr-Auliye  — a man who survived the Flood, one of the three saints who were late for Noah’s Ark, and therefore tried to escape on a makeshift raft. Return to the cordon and transfer to the village Zhasybai (15 km). Dinner.

Day 3
Breakfast. Walk from the lake Zhasybai to the Bashmachny pass (3 km), from where there is a good view of the highest point of the Bayanaul mountains — the top of Akbet (1022 meters above sea level). Return to the hotel (3 km). Dinner. Transfer to Karaganda. End of the tour. 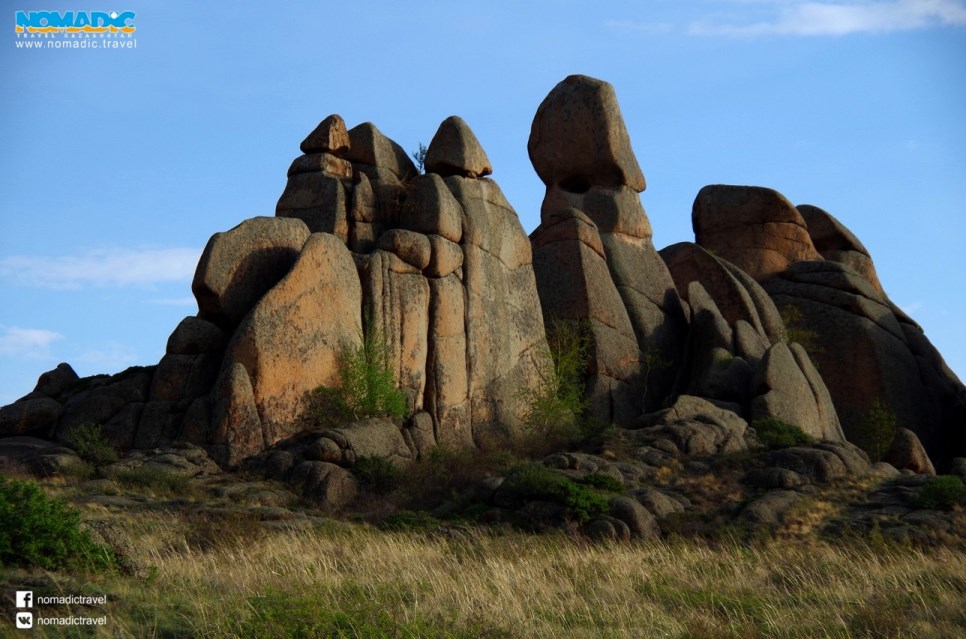 Cost of the tour

The above mentioned prices include: all the journeys by all-wheel drive minibus according to the program of the tour, services of a driver and an English-speaking guide-interpreter, accommodation in hotels (double rooms), three meals a day, visiting museums mentioned in the program, ecological fee for visiting territory of Bayanaul SNNP.

The above mentioned prices do not include: visa expenses and consular fees, insurance, the price of getting to the starting point of the route and way back from Karaganda.

If required the tour can be adapted according to the schedule of arrival and departure flights of the participants. In this case the cost of the tour may slightly change.

Being natural oasis amidst huge steppe land, for a long time Burabai had been a favorite place for nomads. Due to the nomadic lifestyle and late introduction of literacy, most of history is known in verbal, as legends and ethos or is not known at all. But this does not bother enjoying the beauty of […]